How I met Bill Illet

I recently did a three-part series with the Santa Cruz Warriors when I traveled with them to Boise, Idaho. You can read Part I, Part II and Part III.

Anyway, I was on the bus with the team heading to shootaround on a Saturday morning. It was about 10 a.m. when the players arrived at CenturyLink Arena, where the Idaho Stampede play, and I remember sitting down courtside to watch the practice and take notes.

Already on the court at that time was an older man, on his hands and knees, scrubbing away at the minor scuffs and scratches that were on the floor. He said “hello” and appeared genuinely pleased that I was there. I was immediately impressed by the Stampede’s attention to detail, their friendliness, but also feeling as if they were working their custodial staff too hard.

It wasn’t until about an hour later, when shootaround was wrapping up, that I found out the older man, who was scrubbing away at the court, was actually Stamepede managing investor Bill Illet. In the front office, he’s at the top of the food chain.

This is what Illet does, of course. KBOI TV in Boise did a segment with Illet and his pregame ritual. 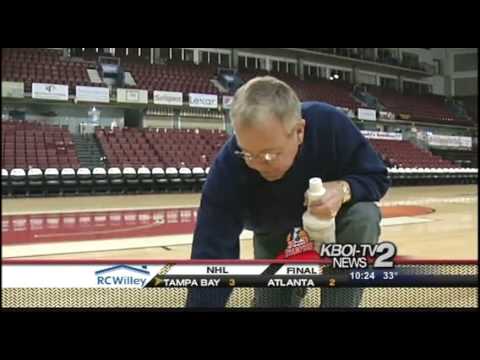