The Cal softball team, which includes Aptos grad Breana Kostreba and Scotts Valley’s Nikki Owens, earned the unanimous No. 1 overall ranking in the nation this week for the first time all season.

Cal remains at the top of the ESPN.com/USA Softball poll for the seventh time in eight weeks. In that ranking system, the Bears garnered all of the 20 first-place votes. Cal hit a previous season high of 18 votes in last week’s rankings.

Cal swept its three-game series with No. 3 Washington last week.

Kostreba is batting .358 (29 of 81) for the Golden Bears with 6 homers and 27 RBIs. Owens recently returned to the team after suffering an injury.

Here’s a postgame interview with Kostreba last week after the freshman infielder connected on her second 2-run homer in as many games to help lift Cal to a 4-3 victory against No. 9 Stanford. 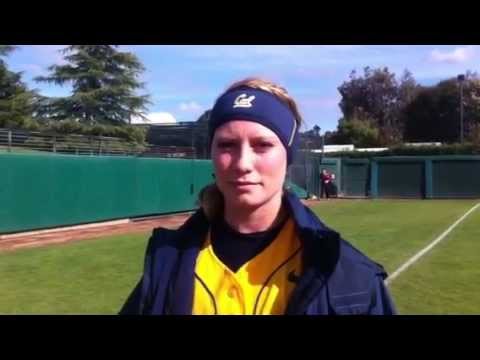